And so it has come to pass. We’ve long kept a weather eye on the difficult journey of Lending Club, the leading direct lender in the US FinTech sector, since its flotation on the New York Stock Exchange in December 2014. We’ve reported several times in News and in our Blog section. Now, Lending Club is effectively left the peer-to-peer (P2P) lending sector.

The scepticism evident in the blog by our director of communications back then, a column also featured in City A.M., seems to have been well founded. Concerns over valuation (and the short-termism of some of the investment bankers driving the IPO) have been largely proven true. The share price has tanked badly – although the announcement of a move away from the original market has sparked a mini-spike of some five per cent (see illustration).

The bad news is there’s a “Bah! Humbug!” element to all of this. The $5.4 billion price tag reflects every dollar loaned by Lending Club so far – and maybe even a little more. So every dollar loaned out means a dollar on the IPO valuation. Imagine taking a tenner in a pub from a friend, putting it in your wallet, then taking it out and handing it on to a friend sitting on the other side of you. The first friend has loaned the money. The second one has borrowed it. And your wallet, by virtue of brokering the transaction, is worth a tenner too.

Nice work if you can get it. If you can, you’re probably an investment banker.

Now this is a deliberately simplified – some might say simplistic – model of P2P lending activity. P2P lenders really are doing the jobs that the banks can’t or won’t do. Businesses need the capital, and savers deserve a much better return than the deposit accounts offer – so lending to fuel growth and get an excellent yield is a double win.

But this aggressive pricing of Lending Club is just that – aggressive. The bankers behind Lending Club’s IPO have played the media like a knackered trout. They were going to price this asset at nearer $4 billion than $5 billion – still a huge price. But now the financial rabbit has been pulled out of the hat, and here’s Lending Club – fluffy, cute, and possibly just a bit too expensive for its own good.

It would be difficult to argue with that. The horrendous bubble in technology stocks – created by the greed of investment bankers and investors alike – finally burst in March 2000 (not long after the IPO of lastminute.com). The market had its say.

It will have its say with Lending Club – and then, pretty soon I’m guessing, with Funding Circle, and maybe a few other UK-based P2P lenders. If Lending Club proves to be overpriced, it will damage confidence in the price of the stocks, and – unfairly – in the P2P lending sector itself.

It is to be hoped that the market finds Lending Club’s valuation fair from the get-go. But hope rarely triumphs over expectation. 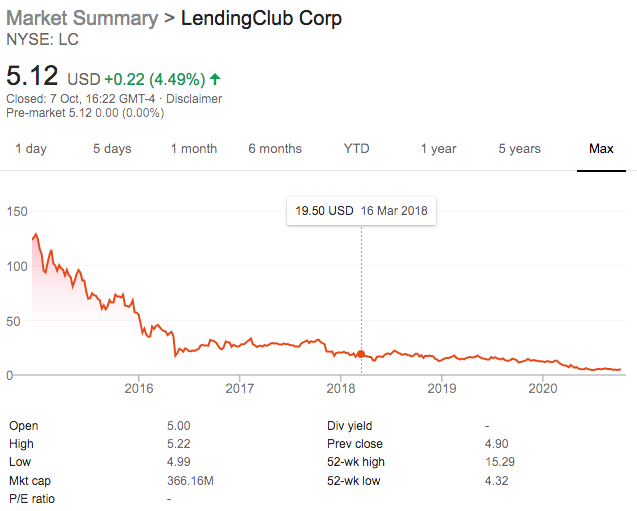 Crowdfundinisder reports “the closing of an important chapter”

LendingClub the leading marketplace lender in the US, has filed an 8-K with the Securities and Exchange Commission stating it will cease offering Retail Notes as of the end of 2020. In an email distributed to LendingClub retail investors, the company said “unfortunately, under a prospective banking framework, it is not economically practical for LendingClub to continue to offer Notes.”

The news from LendingClub represents a dramatic shift entirely away from the peer to peer lending model under which the company was launched. Over the years, the online lender has utilized a marketplace model as more institutional money funded loans originated on the platform with the retail investor becoming a smaller segment of overall lending.

Regulators And Cryptos; We Pick A Winner
26 February 2022

Cryptos, NFTs And Tokens: Provisional Conclusions And The Reasons Why
16 September 2021