Today we’re delighted to publish the first part of a two-part blog from a Money&Co. lender.

Steve Lawrence is an English architect and co-founder of a small London property company, which, post-credit crunch, is metamorphosing into a football data analytics and spatial development consultancy with clients including AFC Ajax, Amsterdam and Cruyff Football, Barcelona.

Following his exchange with Lord Turner on Twitter yesterday, Steve volunteered this blog, which charts his experiences with “genius bankers” and his journey to becoming a Money&Co. lender. Steve is not being paid for this article.

I was more than a little exercised by Lord Turner’s remarks on the BBC’s Wake up to Money programme yesterday morning. They seemed to me to be both ill-informed and possibly rather misleading, especially coming from someone in his position as former chairman of the Financial Services Authority (once the chief financial regulator in the UK). In particular the reference to “The losses which will emerge from peer-to-peer lending over the next five to 10 years will make the bankers look like lending geniuses,” really made my blood boil given that the bankers he refers to so profoundly damaged my business.

Back in 2001 my business partner and I formed a company to provide high-quality flexible and friendly workspace for individuals and small businesses in central London. With commercial mortgages we purchased a couple of freeholds and set about refurbishment to provide about 65 desk spaces which were then occupied under licence by a variety of journalists, designers, architects, tech start-ups and so on.

The business was popular, and the balance sheet strengthened. All the while I kept a careful eye on the Bank of England Base rate and the LIBOR rate – in 2005 we switched from loans calculated over LIBOR to loans calculated over base, and any fluctuation was very important – our licences were short-term and would need to be adjusted upwards if interest rates rose.

I kept my own contemporaneous chart of what was happening, and in mid 2006 rates did start to move up. Then I noticed something strange with 3-month LIBOR parting company with the overnight and base rate. This was not initially a problem for us, but I knew it would be a problem for the bank if it continued. By the summer of 2007 the bank was under-water on our loans. I took the unusual step of offering the bank ex gratia payments so it could avoid losses on the accounts. Instead the bank responded by demanding property revaluations in an effort to establish loan to value covenant breaches so it could renege on the loans but it failed because the loan to value ratios were more than adequate. 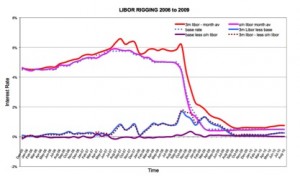 What we didn’t know at the time was that LIBOR margin rigging along with CDO losses were exercising global banking to the extent they were. In late 2008 base rates were brought precipitously downwards and our bank was instructed by its parent to close down its commercial loan book as fast as possible.

I rang every banker I could think of – “Lord Turner’s bankers’ as I termed them to myself – and they all unhesitatingly said “no” to a commercial mortgage, even with significant collateral on offer. At this point our days were numbered, and with loan-end dates approaching we were forced to sell up and evict our licensees. We managed the process pretty well, losing no friends, and ending up with a surplus of cash on the balance sheet, if not much else.

So, our business which had long term potential to grow and grow, was cut short, not because it was unprofitable, but because Lord Turner’s “genius” bankers had actually been cheating each other, and could no longer sustain their loan books.

At that point, with the unexpected cash now on loan to the bank and earning paltry interest, we had to think about what to do with it. Alongside reinvestment in property and a start-up app project I decided to explore peer-to-peer lending.

Coming up: Steve Lawrence on building a portfolio with an eight per cent yield, and why, as an entrepreneur, he believes it’s good to lend to peers running their own small businesses.

Regulators And Cryptos; We Pick A Winner
26 February 2022

Cryptos, NFTs And Tokens: Provisional Conclusions And The Reasons Why
16 September 2021