Half a million savers at Royal Bank of Scotland (RBS) and NatWest will see their interest rates cut by the end of the year as part of what banks are describing as a “simplification” of their product ranges, reports the Telegraph.

The move follows an earlier announcement from Barclays, also reported by the Telegraph, which will affect “millions” of Barclays Individual Savings Account (ISA) savers. “Some customers will lose as much as £200 a year after the changes are made on November 5,” reports the Telegraph again.

The Telegraph adds that a further 500,000 savers will be moved onto a lower interest rate by January. Below, we reproduce the table of Barclays’ current ISA rates. 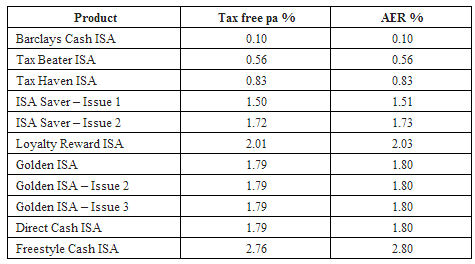 The above offers a sharp contrast to the experience of Money&Co. lenders. Investors in Money&Co.’s loans have seen returns vary from 6 per cent, for the loan to the A-rated engineering company Mecmesin, to an 8.3 per cent yield for lending to the services company, Pitch Perfect Club. These, and several other loans, are available for investment now, for logged in Money&Co. users participating in the loan market (the facility that allows lenders to buy and sell their stakes in a loan to each other).

Yield is just one of the points of comparison for investors considering making a loan. Access and security are also important. Although our loans offer lenders the protection of a legal charge, or debenture, on the assets of the borrowing company, they are not covered by the terms of the Financial Services Compensation Scheme. For a fuller discussion of yield, access and security, click here.

A Big, Profitable Future Ahead – Plus Loan Latest
14 December 2021